After the good news that IAAR had raised € 2000 with the ‘Music For Live’ campaign for the PRH work in Belgian prisons, we enthusiastically started the course “Analysis, path to self-knowledge” for those detainees who had already followed “Who am I?”

Because of regular strikes this was quite a turbulent period though, resulting in the men being expelled from our classroom. But exactly these experiences provided useful material for the inmates to analyse.

And then Corona struck.

The prisons closed their doors to outsiders and no one was allowed to enter.
No more group activities, no more individual exchanges, no visits, and even work often came to a standstill.
In society, people experienced first-hand what it is like to be deprived of your freedom and not be able to go freely where you want to go.

Prisoners are very familiar with this feeling. There was a lot of compassion for people “outside” who were now having as hard a time as them. I received several compassionate calls from prison, and some letters too.

And at the same time, I realized how they were now even more isolated than usual. Often quarantined as well, so they couldn’t even see each other.

The Leuven Central prison has a prison-TV network. A TV network that the prisoners can watch in their cells.

Consequently, we developed some PRH webinars for this jail-TV. In this manner we were still able to support the prisoners digitally in the field of mental health care.

Thanks to the support of IAAR, we were able to realise the following workshops: 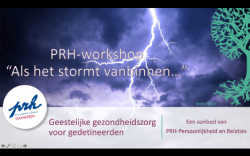 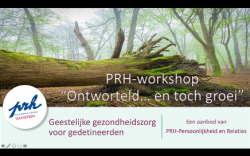 These are two workshops with lots of images and sounds from nature. Detainees can analyse what is difficult for them, but they are also helped to connect with their being.

Two PRH collaborators, Ingrid and Edwine, helped us ensure that creative packs were available for inmates, in order that they could participate from their cells.

In this way, we were able to reach all 350 detainees in Leuven Central with this offer.

The prisons of Bruges and Ghent also showed interest in this formula and gratefully made use of it. Thus, the PRH training became accessible to more than 1000 prisoners in a very special way.

Several detainees have already expressed their gratitude through phone calls or letters.

We are also grateful for the many hands and hearts that made all this possible with the help of IAAR.